Another day, another play. This one was really good. It had a certain charm. It also had an odd anachronistic feel to it. Which I quite liked.

There were two loosely overlapping plot strands. One focusing on Fair Em, and the various suitors attempting to woo her. The other concerning the love life of William the Conqueror. Imagine that. Quite a contrast.

The parts concerning Em set in Manchester felt very Elizabethan. Her father, the Miller, going by the name Sir Thomas Goddard. Though now, thanks to the yoke of the Norman Conquest just a lowly miller without the title. Likewise, when King William heads to Denmark in disguise he goes by the name Sir Robert of Windsor. So these more contemporary sounding names didn't quite sit right with 11th century Danes and Normans. 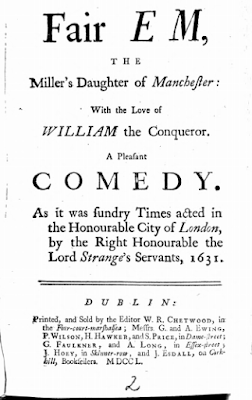 (Cover from a 1750 print)
The play also read very much like a Shakespeare. In many ways much more so than yesterday's Merry Wives.
The vague attribution to Shakespeare comes as it was found in the library of King Charles II, bound with the plays Mucedorus and The Merry Devil of Edmonton, with the label "Shakespeare Vol. I".
I've now read all three of these plays and they all feel very much of a mode. So I'm instinctively leaning towards the idea that they are indeed Shakespeares. As they weren't published in the 17th century under Shakespeare's name this'll have to remain just a subjective opinion though sadly.
Incidentally, in the above pictured 1750 print which I read the writer states in the preface;
"I cannot learn who is the Author of the Play, but, by the Stile, Conduct, and Manner, take it to be wrote in the latter End of the Reign of Queen Elizabeth."
Moving subject a little I also noticed that in the text William the Conqueror is often referred to as a Saxon.
Zweno. [..] If William, Duke of Saxons, be the man,
This felt slightly confused. Obviously William's Normans conquered Anglo-Saxon England, though I guess in many ways all these various groups overlap and intermingle to some degree. Plus William effectively becomes leader of these Anglo-Saxon folk after the conquest. So it may be nothing.
It's perhaps worth noting though. As I've mentioned many times on this blog before; when we head back into the dim light of history things often get quite zany and jumbled. In fact, in Richard III it's stated that Julius Caesar built the Tower of London, even though conventional history states it was established after the Norman invasion a thousands years later.
Prince Edward. I do not like the Tower, of any place.
Did Julius Caesar build that place, my lord?
Buckingham. He did, my gracious lord, begin that place;
Which, since, succeeding ages have re-edified.
So we have a little Norman / Roman confusion there it seems.
This is partly why I enjoy reading these old plays so much. Not only do you get to read something from an earlier era of history, but you also get to hear the versions of history those people ascribed to too.
This Elizabethan comedy set in Norman-conquered Manchester didn't disappoint.
Posted by Neil at 1:36 AM