This play's authorship is contested, but the general consensus seems to be that it's the work of Thomas Middleton. It's part of the Shakespeare apocrypha as it was loosely attributed to Shakespeare in the 17th century. By virtue of the fact that his name was scribbled upon the manuscript by someone (the play was never printed). However, two other names (Thomas Goffe and George Chapman) also had the same honour. So such scribblings are likely estimated guesses or wishful thinking on the part of the various scribblers. 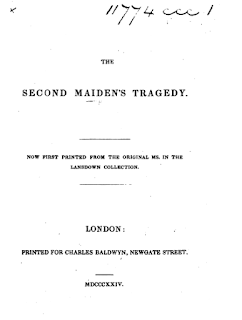 (The cover of an 1824
printing of the work)
The play was quite an enjoyable little read. The two plot strands both dealing with the theme of married women tempted by other men.
A tyrannical king, simply named Tyrant in the play, tries to woo the lady of the former king he's usurped.
And a fellow named Anselmus persuades his friend Votarius to try to seduce his wife in order to test her chastity. A plan which comes unhinged as the wife and Votarius become involved with each other.
This second plot ends in disaster, with everyone killing each other. The main plot ends with the lady killing herself to spurn the tyrannical king. The king, in morbid fashion, then steals her body from her tomb in an attempt to keep his desired relationship with her alive. The usurped king, on the prompting of the ghost of his dead lady, then kills the tyrant and restores her body to its rest.
Quite a tale.
The play doesn't especially read like a Shakespeare. It's not quite as heady and flower-laden. So coupled with the lack of a clear attribution I'm more than happy to go with the consensus view.
It really makes me want to branch out and read some of these other writers such as Middleton though. There seems to be such a gold mine out there, both in terms of general entertainment, and also in terms of historical curiosity. Like little dramatic windows into our past.
Incidentally, the following webpage for the play was a great help in regard the linked notes for the text. The website also seems to be a great resource for Middleton plays in general (a link to the homepage can be found at the bottom). So I may be returning at some point.
https://tech.org/~cleary/2mt.html

"He's lost the kingdom, but his mind's restor'd ;
Which is the larger empire ? pr’ythee tell me
Dominions have their limits, the whole earth
Is but a prisoner, nor the sea, her jailor,
That with a silver hoop locks in her body ;
They're fellow prisoners, though the sea looks bigger,
Because it is in office and pride swells him ;
But the unbounded kingdom of the mind
Is as unlimitable as heav'n , that glorious court of spirits."