Shakespeare - Scenes of the Scenes 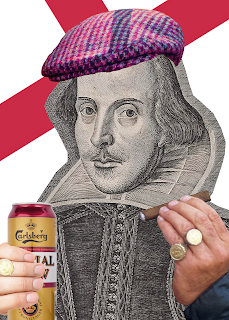 (The real anglo Shakespeare)
Anyway, I've finally done it. For both the accepted plays and the apocrypha ones. So I now have some data.
The First Folio
Firstly we have the 36 plays of the First Folio. The classic Shakespearean canon. (For the time being I'll leave Pericles, The Two Noble Kinsmen and Edward III in the apocrypha category, though they're generally accepted as being genuine works these days).
Of the 36 plays just 14 are set in England, and that's including the 10 history plays, which all deal with English history. (Some of the history plays have scenes in France too of course, but they're essentially all happening from an English perspective).
I'm also including Macbeth in the 14 'English' plays.
Instinctively I'd like to exclude it. After all Scotland isn't England (though Macduff does go to England in the play). Likewise it feels quite exotic in relation to the England of the time - the fact that we call it "The Scottish Play" kind of emphasises this distance. However, it's difficult to draw a clear line between Britain and England historically. Things tend to blur ..plus I don't want to cheat. So it's in there.
If we break things down this is what we get.
Comedies:                1/14                7.1%
Histories:                10/10               100%
Tragedies:                3/12                25.0%
Total:                       14/36              38.9%
So not many comedies set in England, just a few more tragedies (even with Macbeth), and overall it's less than 40% of the total.
Incidentally that one comedy is The Merry Wives of Windsor. The other two tragedies are Cymbeline and King Lear. Both being set in ancient Britain. So I guess you could say British rather than English in a sense. Again, it's difficult to draw a line though.
The Apocrypha Plays
So let's compare this to the apocrypha plays.
As mentioned in previous posts there isn't really a definitive list of what constitutes the apocrypha plays. So to keep things simple I've just went with the twenty listed on the Wikipedia page. My particular interest is the dozen or so plays that were attributed to Shakespeare during the 17th century. Particularly those published as "by William Shakespeare" or "by W.S". So I'll also look specifically at those ones too.
Total:                15/20 set in England/Britain          75%
Those published with "by Shakespeare" on the cover:    4/6            66.7%
Those pub. with "by Shakespeare" or "by W.S." on the cover:    7/9            77.8%
So the percentage of plays set in England is approximately double that of those in the First Folio. So quite a notable difference.
The Apocrypha Plays Now Accepted As Genuine
An interesting thing also happens when we remove those now accepted as genuine works from the apocrypha list (Pericles, The Two Noble Kinsmen and Edward III) and place them with the First Folio.
Total:                14/17 set in England/Britain            82.4%
Those published with "by Shakespeare" on the cover:    4/4            100%
Those pub. with "by Shakespeare" or "by W.S." on the cover:    7/7            100%
The total increases, and those published as by Shakespeare in the 17th century flick up to 100%.
For the record those four published as "by Shakespeare" are the plays The Birth of Merlin, Sir John Oldcastle, A Yorkshire Tragedy and The London Prodigal. The added three with "W.S." on the cover are Locrine, Thomas Lord Cromwell and The Puritan.
This list tallies quite nicely with the seven plays added to the canon in the 1664 Third Folio. The only difference being that this has Pericles, Prince of Tyre listed, and omits The Birth of Merlin. 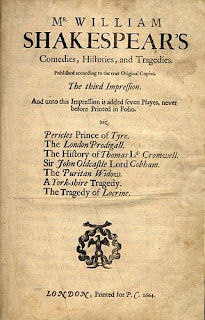 Of course, removing the three plays from the apocrypha list also changes the numbers for the accepted canon slightly too.
Comedies:                1/16                6.3%
Histories:                11/11               100%
Tragedies:                3/12                25.0%
Total:                       15/39                38.5%
Comedies set in England are rare indeed it seems.
Conclusion
To conclude I think this information supports my general view that plays set in England, or dealing with British history, are less likely to be considered as true Shakespeares. My suspicion is that this is a product of cultural snobbery on the part of later Shakespeare compilers and academics. A play set in London or Yorkshire simply doesn't carry the same exotic gravitas that a play set in Venice or Milan does. So they come across as more earthy and vulgar, and therefore less highbrow.
Leading to a cry of; "This couldn't possibly be the work of the hallowed bard!"
Of course, one big snag with this idea is that these apocrypha plays simply weren't included in the First Folio, which was published in 1623. Just seven years after Shakespeare's death. So any cultural snobbery would've had to have begun pretty early. Unless the First Folio itself is questionable in some sense (it is a very elaborate and swish publication considering the era !).
The three plays that have been upgraded to official status (Pericles, The Two Noble Kinsmen and Edward III) all fit the established consensus picture fairly well. Both Pericles and The Two Noble Kinsmen are set in far off locations - Tyre, Antioch, Athens, Thebes, etc. And Edward III, though undoubtedly English, fits fairly neatly with the 10 other history plays. So in regard the more recent inclusion of these works cultural bias certainly can't be ruled out.
My other floated contention was that some of these apocrypha plays might have been discarded because they didn't fit the consensus history itself. For instance, The Birth of Merlin and Locrine both owe their origins to the Geoffrey of Monmouth account of British history. Which was popular in Shakespeare's day, but came to be largely discredited as myth and fiction in later eras.

"[Monmouth] is best known for his chronicle The History of the Kings of Britain which was widely popular in its day [...] It was given historical credence well into the 16th century, but is now considered historically unreliable." - Wikipedia

However, both King Lear and Cymbeline fall under this general category too. So I may have to discount this idea.

Finally, it perhaps would be useful to split the seven plays published as by Shakespeare or by W.S. into three general sub-categories. To delineate things a little more clearly.

The Yorkshire Tragedy, The London Prodigal, The Puritan

Locrine, The Birth of Merlin

Splitting things like this it would be easy to speculate that the last four plays may have been excluded simply because they're not good enough (or perhaps not tasteful enough). Thomas Lord Cromwell and Sir John Oldcastle have a similar feel to the history plays, but as the central figures aren't kings they lack that same gravitas. Also the fact that Oldcastle is a doppelganger for Falstaff muddies the pristineness further. A bit like when a different actor comes in to play a familiar character in a TV series. People don't really like it. We know it's just a TV show and that these aren't real people, but still, we like things to be consistent.

"That's not the right person!! They've ruined it!"

So I imagine having a version of the much-loved Falstaff in the collection, but with a completely different name would be a little too imperfect for some people.

It's also worth mentioning that the Protestant/Catholic factor may have had an influence on the inclusion of these plays too.

As for Locrine and Merlin, they could easily fall in with the other tragedies and comedies. However, it may be that they were simply be too poor and unpalatable. It's a while since I've read Locrine, but when I read Merlin last month it was quite whacky lol. Personally I loved it, but I can imagine the general silliness not sitting well with more serious people.

Lastly, the three 'English Plays' are perhaps the most out of keeping with anything in the established Shakespeare canon. Though it should be noted that I've yet to read The Merry Wives of Windsor. Which may fall closest to this tree. So I should do that as soon as possible, once I've sped through the last six apocrypha ones.

Having read an overview of The Merry Wives I suspect that its inclusion owes itself largely to Falstaff appearing in it. How could they leave him out. So I'll be very interested to read it.

In fact, the opening paragraph on Wikipedia contains this line;

"The play is one of Shakespeare's lesser-regarded works among literary critics."

Perhaps it's a little too earthy and English for the critics though??

Then again ..perhaps it's just a bad play.